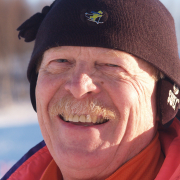 Mike, a long time Alaskan, lives in Anchorage with his wife Rita and has two grown daughters, Heather and Sara.  His interest in Nordic skiing was sparked when his daughters began skiing in Jr. High.  After attending all of their races he decided that he might as well join them on the trails.  Mike has been an NSAA board member for over 25 years and was first drafted to join by his friend Earl Kari.  He is involved in all aspects of NSAA and is particularly devoted to the continued excellence of the trails.  In his free time, Mike enjoys cycling, fixing things and spending time with his grand kids.