Snowmaking began on Nov. 2, the earliest date in the seven years that NSAA has operated the snowmaking system. As of Dec. 15, 2.9 million gallons of water have been used to place snow on various trails. These include the green and yellow trails, the turquoise trails on Gong Hill, and about two-thirds of the stadium. Currently the operations crew is working on finishing the stadium and the purple trail. 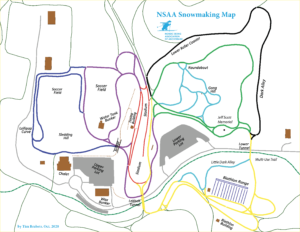 The snowmaking operation overall this winter has been good thus far. We’ve been quite pleased with the new version of nozzles and nucleators we installed on 5 lances. They create twice as much snow as the older versions in the same amount of time so the trails are covered faster. Unfortunately, there have been issues with about half of the 16 lances. As the snowmaking system ages, a number of parts in the lances have started to fail and have had to be replaced. Most likely, next summer the operations staff will need to do a thorough inspection of the entire lance system and replace worn parts such as hoses, valves, and valve motors.